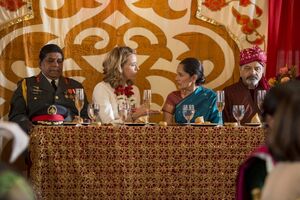 When Elizabeth brings Alison and Jason with her to India on her first state department trip abroad, she’s thrown into crisis mode when a massive earthquake hits that causes an explosion at an American-owned factory, and she and Jason are separated from Alison during the chaos.

Retrieved from "https://madam-secretary.fandom.com/wiki/Passage?oldid=5571"
Community content is available under CC-BY-SA unless otherwise noted.