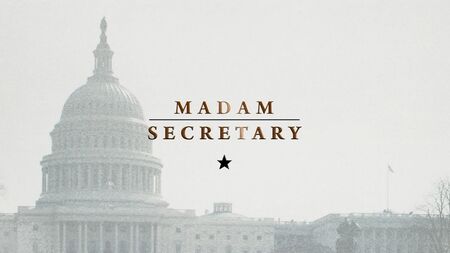 Madam Secretary is an American political drama television series created by Barbara Hall and produced by Lori McCreary and Morgan Freeman. It stars Téa Leoni as Elizabeth Adams McCord. The show explores her life as a shrewd, calculating, and extremely determined United States Secretary of State who drives international diplomacy, deals with office politics, and circumvents/ignores protocol as she negotiates worldwide issues. The show also focuses on the personal lives of the characters. She has been a college professor and a CIA analyst/field agent who left the company for ethical and personal reasons. The president  values her apolitical stance, deep knowledge of the Middle East, flair for languages, and ability to not just think outside the box, but to not even acknowledge that there IS a box. The series premiered on CBS on September 21, 2014.

In Canada, the series airs on Global at the same time as the original broadcast. In Australia, it premiered on October 2, 2014 on Network Ten. On October 23, 2014, it was announced that it will air on Sky Living in the United Kingdom, along with new formats to air TV3 in Ireland, and other international channels. The series launched in the United Kingdom on 23 April 2015. In the Philippines, it premiered on 2nd Avenue on April 28.

"Madam Secretary has been met with generally positive reviews from TV critics. On Metacritic, the show has a score of 66 out of 100, based on 31 critics, indicating 'generally favorable reviews.' On Rotten Tomatoes, the show holds a rating of 66%, based on 50 reviews, with an average rating of 6.9/10. The site's consensus reads, 'Bolstered by Tea Leoni's strong central performance, Madam Secretary is a solid but unspectacular political drama.' "

Community content is available under CC-BY-SA unless otherwise noted.