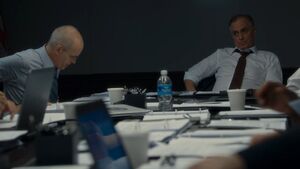 While in the process of dealing with a crisis in Yemen, Elizabeth faces a challenge at home when her oldest daughter makes headlines for protesting her university’s new policy.

Retrieved from "https://madam-secretary.fandom.com/wiki/Another_Benghazi?oldid=6402"
Community content is available under CC-BY-SA unless otherwise noted.